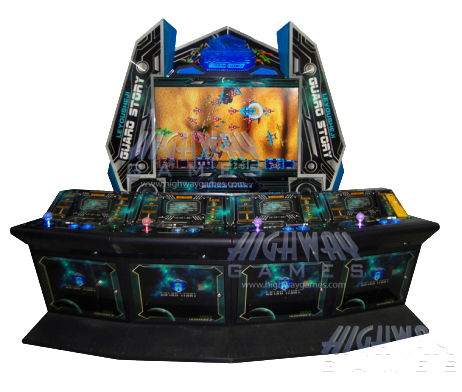 During Guard Story, players use buttons to control their own plane, shooting down the enemy aircrafts and enaging in aerial combat to win points. The more enemies you take down, the more points you earn and the bigger your payout will be! Guard Story Arcade Machine has many exciting features such as strategy military games, attractive props, powerful weapons, and strategy group planes. Players will be able to immerse themselves in a militaristic world with realistic bomber effects such as;

– Flying Disk: The Flying disk will suck up flying planes randomly when shot down by a player.
– Artificial Satellite: The Artificial satellite will add a double-barrelled bomb and once players get faster and they can shoot at the targets within 30 seconds, and will get the chance to win more tickets or tokens.
– Missile: The Missile basically multiples by 300 times, so players can also detonate other aircraft displays on the screen to win extra bonus points.