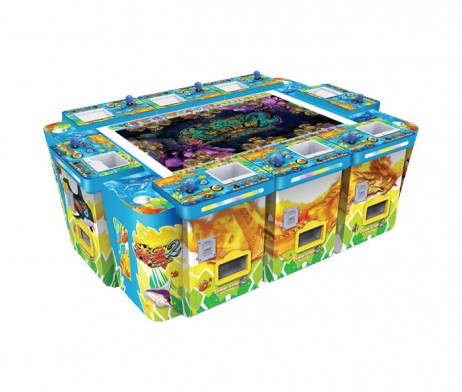 The Ocean King 2 is action-packed and offers loads of new content for players to enjoy! While it has kept some features of the original Ocean King, such as Chain Lightning, Overlord Whale, and 16 returning characters, it also has a huge number of all new features, characters, and mini games!

The Ocean King game controls have also returned (aim using a joystick, firing with the ‘SHOOT’ button and changing guns with the ‘WEAPON’ change button), allowing for a smooth transition between games. Using this, players must battle the monsters who have come seeking revenge of the fallen fish from the original Ocean King game using three guns and special weapons.

The regular guns are fixed in the players arsenal, and they can switch between them at any stage of the game. These include the Fish Net, Gun Tube and Lock gun.

There is also a range of powerful new weapons that appear at random throughout the game! These weapons are essential for players to use to catch lots of fish very quickly and to earn the highest scores. These weapons include:

– Drill Cannon – ricochets from one side of the screen to the next, damaging and/or killing everything in it’s path. Once it has travelled as much as it can, it explodes taking even more fish.
– Chain Explosion Crab – a revised version of Bomb Crab that explodes not just once, but a total of 3 times, moving around the screen with each explosion! This is capable of killing all fish in range with a maximum of x10 credits!
– Flamestrike De-Buff – this is random feature, where players must shoot the weapon in the specified time and they can get Double Score or Extension of Shooting time! Very useful for players competing for high scores.

There are a number of new features in Ocean King 2, such as BOSS characters, which players must try and defeat, as well as a super sizing feature that turns the low profit fish (like Clown Fish, Butterfly Fish and Fugu) into giant fish. These fish are much harder to kill and are worth more points.

The Boss characters include:

– The Prehistoric Giant Crocodile – he will attack players as he swims by, damaging their weapons.
– The Night Monster – who makes the screen go dark, and it becomes very hard to see any of the other fish to score points.
– Overlord Crab – all hail! This king of crabs can be taken out either by damaging his pincers or killing him directly.
– Deep Sea Octopus – this monster is too huge to fit on the screen, players must attack his tentacles to defeat him!

Ocean King 2 also features a new mini game called Battle in the Golden City, which is free to enter. The game appears randomly and players must catch the fish within the time limit. Score potential is unlimited and players can get rewards, such as Double Treasure Chests!

The game also has settings which are operator adjustable to make the Ocean King 2 compatible with a range of locations and their needs. These settings include payout function, background music, sound effects, shooting time limit, odds and chance levels, plus more!

The Ocean King 2 : Monster’s Revenge is an action-packed game offering more content than it’s predecessors. This game builds on the well established success of the Ocean King, a top income earning machine, showing it’s precedent for success in a variety of locations and it’s appela to players of all skill levels. This bright cabinet and addictive gameplay will have players coming back time and again for more chances to win!