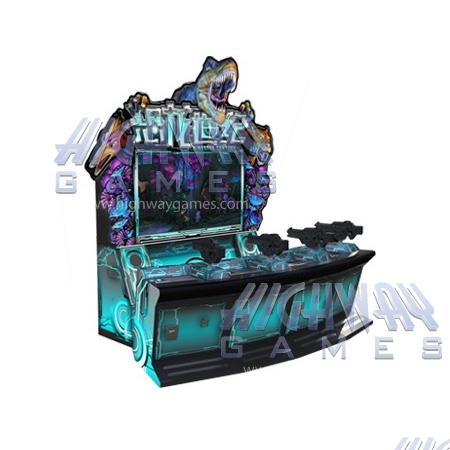 Dinosaur Century is a brand new redemption game from IGS. Featuring colourful, top notch graphics in a deluxe 4 player cabinet. During Dinosaur Century players travel back in time to hunt dinosaurs using a joystick or gun, taking out the biggest and baddest of the prehistoric era.

Dinosaur Century Arcade Machine is a brand new video redemption game from IGS. Featuring colourful, top notch graphics in a deluxe 4 player cabinet. During Dinosaur Century players travel back in time to hunt dinosaurs using a joystick or gun, taking out the biggest and baddest of the prehistoric era.

Using the controls to select from multiple weapons, players earn points by blasting the hordes of dinosaurs that walk or fly across the screen. Taking out the largest dinosaurs – like the T-Rex – earns players the most points.

– Available with Joystick and Push Button or Gun Controls

Click on the following link for a video of the exciting Dinosaur Century Arcade Machine: