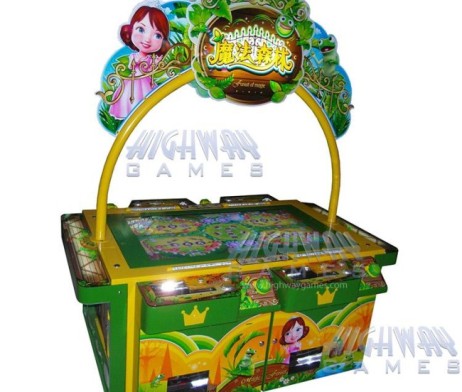 Forest of Magic is a video redemption arcade game machine, which is a four player game with a forest theme, where the players earn points in a pinball game play scenario. The aim of the game is to launch your balls at the right angle so as to get the most points and get past the little, magical King Frog.

Forest of Magic Arcade Machine is a 4 Player video redemption arcade game machine, with a forest theme, where players earn points in a pinball game play scenario. The aim of the game is to launch your balls at the right angle so as to get the most points and get past the little, magical King Frog.

During Forest of Magic, players use the frog-faced turn dial to change the trajectory of the ball, as represented by the red arrow on the screen. Players will notice as they turn the dial left, the arrow gets smaller and bigger if it is turned to the right. Once the player is happy with the adjusted trajectory, they hit the big ‘OK’ button to confirm the launch path. Once locked in, players can start pressing the smaller ‘SHOOT’ button (to the top right of the ‘OK’ button, it has a little picture of the ball character on it) to start launching a stream of balls onto the playfield.

Players earn points  in Forest of Magic as the balls ricochet from Wooden Bumper and Mushroom Bumper barriers. As the balls dart around the playfield and all the while, they have to try and avoid being hit by the magical King Frog who is throwing magic missiles at the balls. If your ball gets to the frog the three large coins in the middle of the individual players field will start spinning.

Different combinations reward the player with cool bonuses, such as extra balls, or, bonus points! For example, if players get three princess faces you get a shot at the middle circle bonus game, where you can get a treasure chest that grants a hefty multiplier such as x100 or x250!

When a player has had enough they may press the payout button to pay out their credits in whatever way the machine is set to, such as coins or tokens. The concept is quite simple, but is fun and exciting for players of all ages, and the bright, vibrant cabinet will attract players from all across the floor.

Click on the following link for a video of the exciting Forest of Magic Arcade Machine: