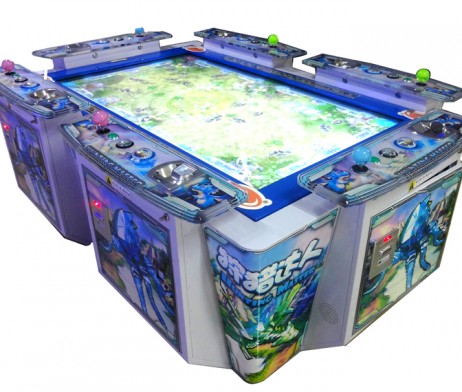 The Hunting Master Arcade Machine is a 6 player video redemption cabinet with a hunting theme, which amazing aninmal and dinosaur characters for players to enjoy!

The Hunting Master Arcade Machine is a 6 player video redemption cabinet with a hunting theme, which amazing aninmal and dinosaur characters for players to enjoy!

To start playing Hunting Master, players simply insert credit and start, using the joystick to control the direction of your Cannon, right, left, up and down; and players can switch between various weapons of 1 to 8 power levels by pressing the strengthen button. Once a target is lined up, hit thr shoot button to try and capture them. Tickets will be given out for caught animals, and the more and bigger animals players catch, the more tickets players will earn.

The weapons include the Cumulative Super Gun, Laser Gun, Super Missiles, Full Screen Super Bomb, and other weapons upgrade (there are 8 in total). Mini game features include single and linking match games fopr versus and/or co-operative play, including Pambu Frog, Separate Beetle, Catch Mouse, Free Game, and Luck Little Wheel. These games may appear at random. There are also 4 hunting games which can be played by all 6 playerd at once, including Mission Model, Prize Boss, Cumulative Stars Ultimate Prize, and Challenge Prize.

This fun and interactive game, is unique in terms of the game play interaction between players, plus it’s bright cabinet design, simple game play concept, and challenging features make this game appealing for players of all ages and skill levels.