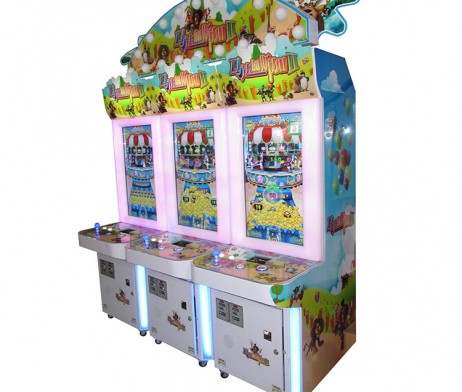 Madagascar Arcade Machine is a video redemption game in which you shoot coins at the Madagascar characters to collect coins, awards and random jackpots to win tickets. The more coins you collect the more tickets you win.

Madagascar Arcade Machine is a video redemption game in which you shoot coins at the Madagascar characters to collect coins, awards and random jackpots to win tickets. The more coins you collect the more tickets you win. The Madagascar Arcade Machine is based on the popular movie franchise, starring Ben Stiller, Chris Rock, David Schwimmer, Jada Pinkett-Smith, and Sacsha Baron Cohen, in which  by using a simple and fun game concept and bright LED lights, will grab the attention of kids of all ages.

During Madagascar players aim and shoot coins at characters on the screen and as they take down animals, they will turn into coins or awards, like Lottery Games, Random Jackpots, and Animal Times Awards! Characters included in the game include Alex, Marty, Gloria, King Julien, the Penguins, the Chimpanzees, and more!

With fun, recognizable characters, a bright LED lighted cabinet, simple game play layered with loads of features, and multiple difficulty levels, the Madagascar Arcade Machine is suitable for players of all ages and skill levels!