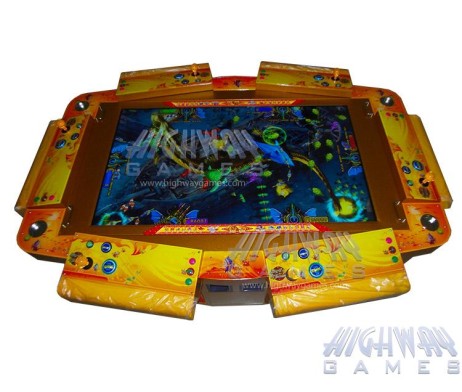 The King of Treasures 55inch Arcade Machine is a top of the range arcade game from the Ocean King series built in Taiwan. It is a video redemption game with an oceanic theme, in  which players will get tickets for catching fish and is the second English version game to be released in this series.

The arcade machine features a 55inch high resolution display monitor and uses similar controls, fish and mini game features as the original Ocean King game, but has added fun extras for players to enjoy. In King of Treasures an epic new weapon has been added to the player’s arsenal – the Machine Gun, which can be accessed by players by clicking the joystick upwards twice.

There are also extra fun characters included in the game. All the original characters are in this King of Treasures game, with an additional three crazy characters – Laser Crab, Roulette Crab and Golden Dragon! The Golden Dragon is worth 300-500 points for players and is very hard tocatch. Players may need to work together in order to catch him, but beware: whoever casts the last net gets the points! The Laser and Roulette Crabs, are fun play features like the Explosive Crab, and are there to help players potentially win the game!

The game play is easy to understand, however the addition of multiple characters and mini games layers the gameplay, making it fun and challenging for players of all ages. The King of Treasures is also available as a game board kit, baby cabinet, and as a 58inch 6 or 8 player cabinet; also available with a range of different inputs and outputs.

PLEASE NOTE: This machine is only available with Bill Acceptor and Thermal Printer.

Click on the following links for videos of the exciting King of Treasures machine: