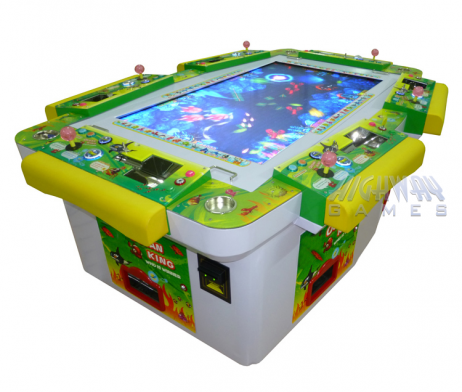 The Ocean King 58inch 6 Player Arcade Machine is a fish hunter style game with an oceanic theme for players to enjoy. The 6 player cabinet is a standard size and works well for most locations, making it the perfect addition to a variety of gaming spaces. Ocean King is a great game for operators looking for more choice, replay value, and are really looking to boost revenue in their location.

The Ocean King 6 Player arcade machine has a very high replay value, so players will genuinely enjoy the addictive game play of the Ocean King, over and over again. With it’s eye-catching, LED lit cabinet and straightforward game play, players will be drawn from all across the floor! Using the Ocean King 6 Player Arcade Machine players can go head-to-head as they race against each other for the biggest catch, trying to score the most points to get the biggest payout!

Although the game instructions are quite simple, it requires a lot of skill and practice to play! However, it is the fast pace and layered game play that really makes this game so much fun. It has loads of exciting features which demand quick thinking and skilled hand-eye co-ordination in order to be the Ocean King!

The Ocean King 6 Player arcade machine features a high resolution 58inch LCD display monitor, with superb 3D graphics! The game features some of the most gorgerous ocean floor and coral scenery seen in a game. Players will always have a spectacular view with the depth of detail to each stage.

To play, simply insert coins into the coin acceptor (or notes into the note acceptor if you have purchased that option) to start; credits can also be put on or taken off the machine using the Key In/Out function. Once the game begins, then players use the joystick to aim their special, high-powered net gun at the various moving targets and once a target is lined up, hit the ‘SHOOT’ button to try and catch the fish.

Each player control panel also features a ‘WEAPON’ change button, which players can use at any time during the game to change between the three net guns. Different guns have different net sizes and power levels, allowing players to adjust the power of their gun to the creature they are trying to catch – the bigger the fish, the more powerful a gun you will need! When you have finished playing the game, simply hold down the payout button for 3 seconds and take your earnings.

– Chain Thunder: this affects nine types of fish, including: Lionfish, Snapper, Butterfly Fish, Clown Fish, Fugu, Lobster, Flounder, Spearfish and Octopus. Use the chain thunder to get up to nine kinds of fish at once and win extra points depending on how many fish, and how many different types of fish, are present on the screen at the time.

– Bomb Crab:  when the Bomb Crab is captured by a player, it immediately explodes, damaging the fish touched by the explosion. This will either catch them for the player or just make them easier to catch for the player.