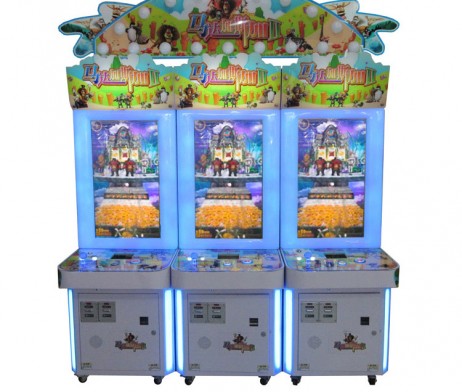 Gold Coin vs Demon King Arcade Machine is a video redemption game in which you shoot gold coins at the demon like characters to collect coins, awards and random jackpots to win tickets.

Gold Coin vs Demon King Arcade Machine is a video redemption game where you shoot gold coins at the demon like characters. Shooting these characters will allow players to collect coins, awards and random jackpots to win tickets. The more coins you collect, the more power you receive and more chance you have of defeating the demon king!

Using a simple and fun game concept, bright LED lights, attractive graphics, and creative characters, Gold Coin vs Demon King arcade machine will grab the attention of kids of all ages. And with it’s huge replay value, players will keep coming back, time after time, for more chances to win!

To play the Gold Coin vs Demon King arcade machine players simply aim and shoot coins at the rotating characters on the screen and as they take down the demons, they will turn into coins or rewards, like Lottery Games and Random Jackpots! There are a total of seven characters for players to shoot at, including fairy creatures and the dreaded Demon King.

There are two main types of demons to defeat and taking down the different demons results in different scores, and can also trigger a treasure box feature. If a treasure box appears on screen, players must push it down to make the spinning wheel begin spinning, when the spinning stops, if three of the same treasures are in link, you will win the jackpot.

Gold Coin vs Demon King arcade machine also includes other exciting features such as;
– Lock The Target: By pushing the joystick down, it automatically locks the players aim in line with demon targets
– Auto Shoot: By pushing the joystick up for three seconds, the autoshoot feature will be activated and will automically shoot at enemy targets. To disable this features, players simply let the joystick go
– Random Bonus: When the playfield changes to a night time scenary with lightening, this means there will be a bonus feature coming up soon
– Super Cannon Bomb: When the players energy bar is full, players can activate the super cannon bomb feature and elimate all demons on the playfield

The Gold Coin vs Demon King Arcade Machine is made of up of a total of three units, so players feel like they are part of a group while the simple game play, layered with loads of features and multiple difficulty levels, makes this game suitable for players of all ages and skill levels!

** Please note this is only available in Chinese Version **